We were in a magazine SaB! 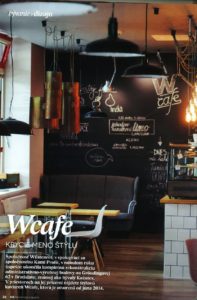 “The building in the central part of Bratislava, formerly known Kožatex, has undergone a complete reconstruction and is now available not only to the owner, Wüstenrot, but also to tenants and visitors of the newly-opened Wcafe.

Last year, Wüstenrot successfully finished a complete reconstruction of the administrative-production building on Grösslingova 62 in Bratislava. “We are very pleased to have done the reconstruction of the building in the record time of only six months.” With the full reconstruction of windows, roofs and facades we have managed to turn what was initially economically costly project into a low-energy requiring building with a Group B certificate. The total renovation costs amount to approximately 1.5 million EUR excluding VAT, “said Michael Ziegler, a member of the Board of  the Wüstenrot Insurance and Wüstenrot Construction Savings Bank.

The building at Grössling 62 is a building from the 1950s. According to the preserved documents, the original building was put into use in 1958, and in 1989 and 1996 there were major building modifications, such as the sixth floor superstructure along with the elevator and elevator shaft or the general boiler repair. In 2009, due to the advantageous location and the need for the expansion of the premises for its own purposes, the Wüstenrot Insurance Company bought the building. The state of the building was unsuitable at that time and required a complete renovation. Its general designer was the s_form studio, supervision was carried out by Reality Consult, Petring Engineering and the reconstruction was carried out by KAMI PROFIT s.r.o/