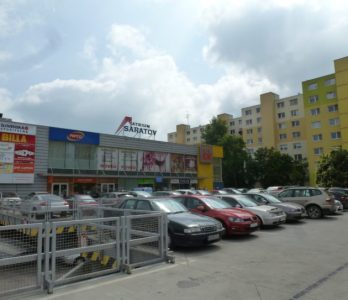 Our company KAMI PROFIT, s.r.o. like a general contractor began with a realization of an annex to the existing object – the Shopping centre Saratov in Bratislava – Dubravka. Object of annex – expansion of store DM for OC SARATOV, is situated on the north-west side of the shopping centre. The future annex will be directly linked to the yet existing operation DM. From the construction view will be necessarily from the yet existing object dismantled part of the facade of sheet metal and also part of the glazing facade.  In 1.NP retail will be new section with their own roof and cladding. In 1PP minor changes will be implemented n the context of door openings and walls in stores and counting Platform of 1.PP in 1.NP for the transport of goods to shops. In 1.PP there will be new toilets.