THE EUROPEAN MODERNISATION AWARD FOR SLOVAKIA 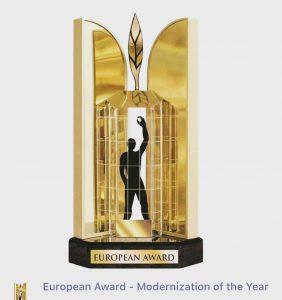 The Slovak company KAMI PROFIT, s.r.o. won the international Construction Contest European Award in the category of office building renovation. The successful completion of the multipurpose object Würth renovation and storey addition brought the company the title along with the golden statuette. The winners were announced on Thursday, 5th September 2019 in Warsaw.

The international contest „European Award“ presents new trends in the building industry and promotes the best projects of building modernisation in Europe. It is the only contest to recognise the cooperation of the best investors, contractors and designers with their common goal. The aim of the award is to choose and award those modernisations and new constructions done in the given year, which are characterised by an individual value in the fields of functionality, urbanism, aesthetics and practicality. „The win makes me very happy, it is a proof of the high quality and the originality of our work. I am proud of our team thanks to which we were successful in an international competition,“ was the reaction of the managing director of KAMI PROFIT, Mr. Milín Kaňuščák. The company won the award for the reconstruction and the storey addition of the Würth Slovensko headquarters in Pribylinská street in Bratislava. The old building was not demolished, the bigger part remained preserved. The client’s challenging vision became reality. All equipment along with the facade were removed, the load bearing structure partly remained. The result of the following reconstruction and storey addition is an original, modern and functional building, in the middle of a park that meets world standards. A typical Slovak element of a folk needlework pattern and a platanus tree, which is an integral part of the building in a mutual symbiosis, make the original character of the building even more outstanding. The technologies that were used were innovative on different levels, e.g. the load bearing structure used the Cobiax system. The installation of plastic balls into the construction allowed the building to achieve material economy that was needed not only for the ceilings themselves, but also for their support. We were able to extend the useful floor area and the serviceability of the space by decreasing the number of the support columns. The Cobiax hollow boards are the first and so far the only holder of the national technical certificate awarded by the German Institute for Construction Technology in the field of flat boards that allow a biaxial shift of the load.

The company KAMI PROFIT, s.r.o. deals in the complex construction management. It started in 1997 with managing smaller regional constructions. It was gradually extending its portfolio by constructions of city and regional importance. In 2005, it extended its scope of work by building important industrial parks in Slovakia as well as EURO MAX Shopping and Entertainment centres. Besides other constructions, it managed the investment preparation of the project III Veže (The Three Towers) in Bajkalská street in Bratislava which also, under its lead, passed the final inspection and was put into operation. The company has been managing the construction and reconstruction of Billa s.r.o. shopping centres all around Slovakia since 2009, it finished the Trnava Industrial Park at the turn of 2011 and 2012, it provided the reconstruction of former barracks – KulturPark Košice in 2012. The company was working on the project management for the Ovčiarsko highway tunnel and for the construction of the D1 highway Lietavská Lúčka – Dubná skala. It extended its activities to Czechia and Austria, later also to Croatia at the turn of 2015/2016. The company successfully finished the construction of a Slovnaft petrol station with a unique design in Prístavná street in Bratislava in 2017 which was a contestant in the contest Construction project of the year 2017. It is working as a general contractor at the construction of the Block BC, D Rudiny II in Žilina and it also participates in the D4R7 highway construction.